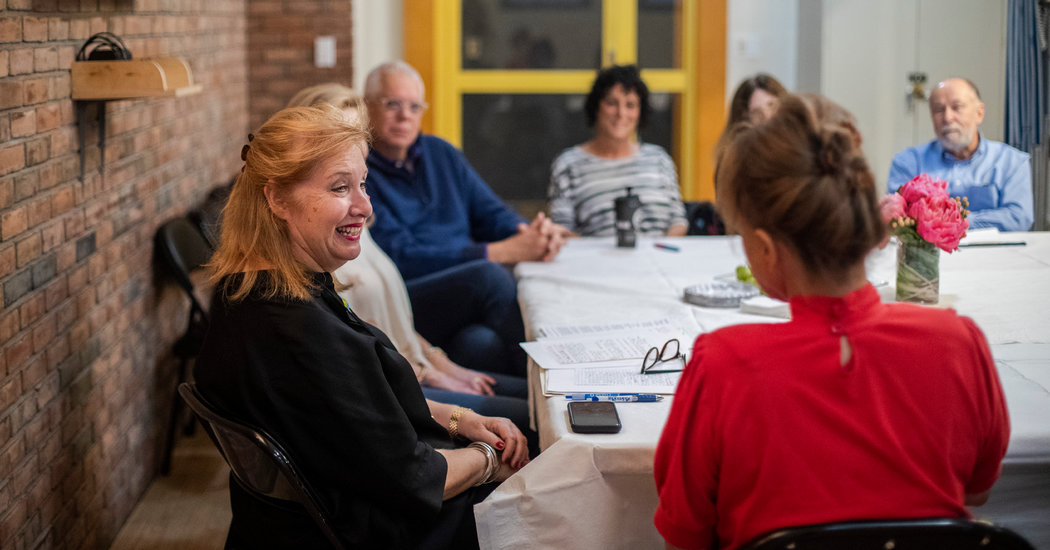 The first grandparent to arrive, Rohna Paskow, had taken the train from suburban Philadelphia. She saved seats for her daughter-in-law’s parents, Charles and Michele Buchbauer, who were driving 50 miles from rural New Jersey to join her.

Their grandson’s birth was still two months away. But Ms. Paskow’s daughter-in-law had asked everyone to sign up for this workshop, called “Now That You’re a Grandparent … Navigating Your Relationship With Your Adult Children,” at the 92nd Street Y in Manhattan.

So here they all were. “Anything for him,” Ms. Paskow said. “Already.”

Ms. Tannen also leads support groups for young parents, mostly mothers, where for years she has heard them fretting about the way their expanding families can strain connections with their own parents and in-laws.

“They’re feeling so vulnerable as new parents that they hear everything through the lens of criticism, no matter what we say,” she told the group gathered around the table. “And they push us away. They want to be the bosses of their own lives and their own kids.”

Moreover, she cautioned, “grandparents can act wildly inappropriately in the beginning when they’re getting used to their new roles.”

How wildly? At the Y, they’re still talking about a grandfather at a previous workshop. Thrilled when his daughter in California became pregnant, he planned to hop on a plane — with his second wife — as soon as the baby arrived, paying the brand-new family a surprise visit.

Ms. Tannen, herself a grandmother of three, didn’t have to tell the man that this seemed a dubious idea; an oh-noooo chorus around the table did the trick.

“Ask your children what they need. ‘How can I help you?’ is probably the best gift you can give them,” Ms. Tannen counseled. “It will go very far toward allowing relationships to flourish if they feel supported in their role as parents.”

I can understand the grandpa’s impulse, though. In the excitement over a new grandbaby — which we all figure we’ll know how to handle because, after all, we’ve already done this at least once — it can take a while to recognize that nope, grandparenting is a whole different gig.

True, much of it feels familiar. We’re not likely to forget how to support a new baby’s fragile neck when we pick her up, or why you don’t burp her without a cloth on your shoulder.

When I became Bubbe to my now 3-year-old granddaughter, Bartola (a family nickname, a nod to the former Mets pitcher Bartolo Colon), I was startled by how much came flooding back: songs, diapering techniques, silly stuff that makes babies chortle.

And the new parts, like how to manage those insanely complicated car seats and how you never ever put a baby to sleep on its stomach any more, aren’t hard to learn.

In fact, grandparenting classes have popped up across the country to instruct us on safety and support during an infant’s first few months. You can sign up for them at hospitals in, among other places, Seattle, Palo Alto, Chicago and Plano, Texas, and at parenting centers in Houston and Santa Monica.

The tougher part, I think (and Ms. Tannen agrees), is what comes afterward. Grandparents have few road maps for the ensuing months and years when you’re trying to be helpful but not take over, hoping to be close but learning to respect boundaries other people — your own children, the ingrates! — have established.

You’re negotiating not only with your kid but often with your kid-in-law, as well as with another set of grandparents, perhaps several. You may also be contending with distance. It’s easy to screw up.

None of these workshop participants — several veteran grandparents, most new to the role— wanted to be wildly inappropriate.

So the questions flew.

How do you handle who goes where on holidays? At Thanksgiving, “there’s this longing to be all together,” confessed Ellen Birnbaum, grandmother to four boys, who plans dinner with her daughter’s family but misses her son’s because they travel to his wife’s relatives in Florida. Ms. Birnbaum contents herself with more inclusive gatherings on the Jewish holidays.

Eric and Ilise Lange practice “time shifting,” assuring their children that celebrating Thanksgiving on Friday or Saturday will be just fine. Michele Buchbauer has a friend whose family get-together occurs in late October when airfares to California are low.

What about social media? The Langes and Joan and Marty Abramowitz, seated across the table, all lamented that their kids (who are married to one another) have forbidden them to post anything about their shared new grandson on Facebook.

It’s a pain to have to text dozens of friends instead, but “none of us have violated it,” Mr. Lange said of the restrictive policy. “We’d be killed.”

“Has anyone run into trouble with gifts and how much to spend?” Ms. Buchbauer (whose grandson, remember, has yet to arrive) asked the group. “I think there’s going to be a lot of limits.”

“Think about your own grandparents,” Ms. Tannen advised. “What was it you really enjoyed? It wasn’t the toys, it was the experience.”

Others chimed in to describe rituals they’ve established, trips taken together, weekend visits when grandparents give overscheduled kids the gift of acceptable indolence and everyone barely gets out of pajamas. “There are so many ways to be close,” said Ms. Birnbaum, reassuringly.

But hey, what about the daughter-in-law who’s a strict vegetarian? No buying that grandson a hot dog at a ballgame? Ever?

After the workshop ended, people were still milling around, talking. Mr. Abramowitz wondered whether the group might meet again, perhaps regularly.

“Three months down the road, what have you learned?” he wanted to ask the others. “What mistakes have you made?”

Good questions. Why aren’t there more support groups for grandparents — not only for those heroes raising their grandchildren, which already exist, but for anyone?

Few relationships bring greater delight and meaning when they go well, and more heartache when they falter. Maybe we can help one another improve our odds of getting it right.

6 Core Patient Portal Features to Get More Patients on Board

Could a Kid’s Microbiome Alter Their Behavior?

Why Are Fewer U.S. Kids Going to Pediatricians?

What We Know About the Wuhan Coronavirus