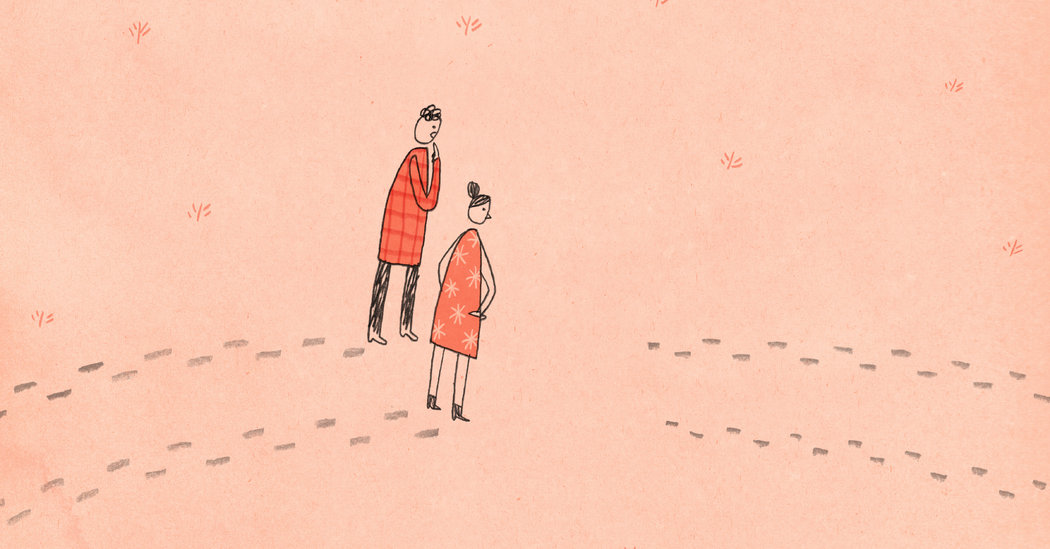 According to Rich’s Bumble profile, he was fit, with a head of mussed silver curls, divorced and, like me, almost an empty nester. At 58, I was still trying to find my romantic footing after the agonizing end of a 35-year marriage.

I had cried a lot that summer. Now I was ready for someone new.

As we strove to match schedules, Rich’s rapid-fire texts were refreshingly self-deprecating. “If you’re looking for a bad boy,” he wrote, “I don’t think you’ll like me.” He described his fitness level as “right in that Goldilocks zone between gym rat and dad bod.”

When we met in person, I thought he looked attractive enough, though, yes, a bit dad-like. And he was an exceptional listener: attentive and full of questions, if a little too eager to please.

When I mentioned my difficult relationship with my mother, he said, “Just like my mother. You’ve heard the term borderline?”

When I described being raised by my long-suffering immigrant grandparents, he said, “I had those same adorable Jewish grandparents. They got me through my crappy childhood.”

I had been charmed by his texts, but in person I was wearying of what seemed like his forgone conclusion — that we were already a match.

[Sign up for Love Letter, our weekly email about Modern Love, weddings and relationships.]

Nevertheless, I found myself somewhat reluctantly agreeing to a second date. Rich seemed like a man I might enjoy chatting with at a party, then never see again. Could I articulate why? Did it matter?

For decades I had clung to a kernel of dating wisdom gleaned from an encounter gone wrong. I had married so young, at 23, that my courtship savvy approached nil. That “encounter gone wrong” was the only date I went on while my husband and I had a 14-month separation nearly a decade into our marriage. My husband had moved out of our apartment to live in his work space. A lonely standoff followed, during which I cried myself to sleep and consulted divorce lawyers.

Friends urged me to consider the back pages of The New York Press, known for its lively personals section catering to singles who saw themselves as hip or a little nonstandard. I had picked up the paper then put it down, reluctant to contact a stranger. Then one guy’s ad grabbed my attention: “If you’re smart, verbal, good-looking, emotionally unencumbered, witty, happy in work, close to friends, and you loved ‘The Singing Detective,’ we’re similar. I’m 37.”

I was 34, unencumbered, close to friends, and had just started an adjunct teaching job I was actually happy about. And I loved “The Singing Detective,” a then-edgy TV series featuring depression-era dance hall numbers and a subplot involving psoriasis. As for looks and wit — well, those were subjective.

I responded. We agreed to meet a few days later at the Peacock Cafe on Greenwich Avenue.

The man awaiting me turned out to be surprisingly attractive, with strong shoulders. He was dressed casually but had made an effort. Afterward, when describing this encounter — my cautionary tale — I couldn’t remember his name or profession. His looks, other than high cheekbones and a thatch of dark curls, were a blur to me. What I retained was the rigid, puzzling format of our interaction.

Doggedly, like a professional interviewer, he kept bringing our conversation around to his purpose, which was, it seemed, to verify that I truly loved “The Singing Detective.” And he seemed oddly miffed that I liked other favorite artists of his: Elvis Costello, Leonard Cohen.

When I effused about the songwriters, films and plays he kept invoking, he would freeze, looking crestfallen. Why, since we shared the same taste? Did he think I was lying, intentionally mirroring him to make us seem compatible?

When it was time to leave, we loitered in the chilly dusk. Would he say he had enjoyed himself and hoped to see me again? He didn’t, and I walked to my subway confused, a bit furious.

Two days later, he called, sounding nervous, to invite me to a Spalding Gray show I was dying to see. But I had made up my mind: Anyone who had been that off-putting on a first date wasn’t getting a second. To reject him as painlessly as possible, I ad-libbed: I was sorry, but in the last 48 hours I had decided to reconcile with my husband. He sounded nonplused and we hung up.

For years afterward, when I was back with my husband, girlfriends (who were themselves pursuing mates) had to hear me tell the story of that most perplexing date, a cautionary tale about trusting your first take, which boiled down to: If you’re not excited about seeing a guy a second time, cut your losses. Move on.

More than two decades later, here I was breaking my rule, agreeing to go out on a second date when the first hadn’t done anything for me. And sure enough, this one was falling flat too. We weren’t running out of topics, but our chat about the prescience of “The Handmaid’s Tale,” our children’s endless college tours and the decline of the subway, felt generic.

Not that there was anything off about Rich, an intelligent, affable guy who simply wasn’t as exciting as his Bumble persona. But since I was feeling no chemistry, why waste time? At our age, who has time to waste?

I restlessly veered to a stock question: “Have you done much online dating?”

“Yes, since my divorce,” he said. “And I met my ex through an ad, pre-internet, in The New York Press. Which you may not have heard of.”

“Hah!” I said. “Actually, I went on my worst date of my life thanks to that newspaper.” And I told him about the man who seemed to want to reject me because we had so much in common, so aversive in body language and expression that I never wanted to see him again. “When he called to ask me out for a second date, to go see a Spalding Gray show, I hadn’t prepared an excuse, so I pretended I was getting back together with my husband.”

“You made that up?” Rich said, seeming bothered.

“But it turned out to be true!” I said. “Not long after, my ex and I did agree to try again. So, happy ending, for a while, at least. Though I’m sorry I missed Spalding Gray.”

I laughed, but Rich wasn’t laughing.

“Are you kidding?” I said. “I went on one New York Press date.” I studied him, sensing that something uncanny had just taken place. I searched for the brooding young man with dark hair and high cheekbones in Rich’s fuller face and silver curls. No, this Rich seemed too different in every way. “What are the odds?” I said.

“You’re probably right,” he said. “But I did keep a diary then. I’ll check it at home.”

When he kissed me good night, I lingered, still not feeling much chemistry. Then he disappeared down the hot subway stairs.

An hour later, he texted. “Where was this date?”

“Definitely me,” he replied with a frowny face. He also texted me an image of the classified ad from back then, which he had saved.

I instantly recognized it.

“I liked you!” he texted. “A lot, actually. It’s in my journal. I wanted to see you again. Clearly, I was too much of a jerk to express it.”

I went quiet. I’m not superstitious, but I recognize fate (or the illusion of fate?) when I see it.

So I agreed to another date. This time, we kissed hello with almost ironic complicity. Our conversation in the thrumming tapas bar seemed, finally, less stilted. Afterward, Rich walked me home, and we wound up on my couch, reviewing our long-ago dating fiasco.

“I was trying to impress you,” he said. “I remember being intimidated by you, this pretty N.Y.U. professor.”

“Well, I didn’t get that,” he said. “Maybe you’re right. Maybe you already knowing my references threatened me. It’s embarrassing. But here’s an upside: If I hadn’t been such an idiot then, we wouldn’t be sitting here now.”

“Because we’d be divorced?”

I had kicked off my sandals, and Rich reached for my foot to massage it, as if this were our longstanding habit. And then we began to talk, almost like old lovers, about the reasons for that failed first date more than two decades earlier — connecting, in other words, over our previous failure to connect.

On our next date, we carried a bottle of excellent wine to my bedroom to toast our good luck. That was two summers ago. We’re still seeing each other.

My new rule? Sometimes you can tell on a first date. Or sometimes it can take 24 years.

Fri Feb 14 , 2020
The mandate came as the Chinese government disclosed that hundreds of medical workers who had been helping combat the coronavirus outbreak had become infected and at least six had died.

8 Ways to Make Fitness a Habit

Can Men Dine Their Way to Higher Sperm Counts?